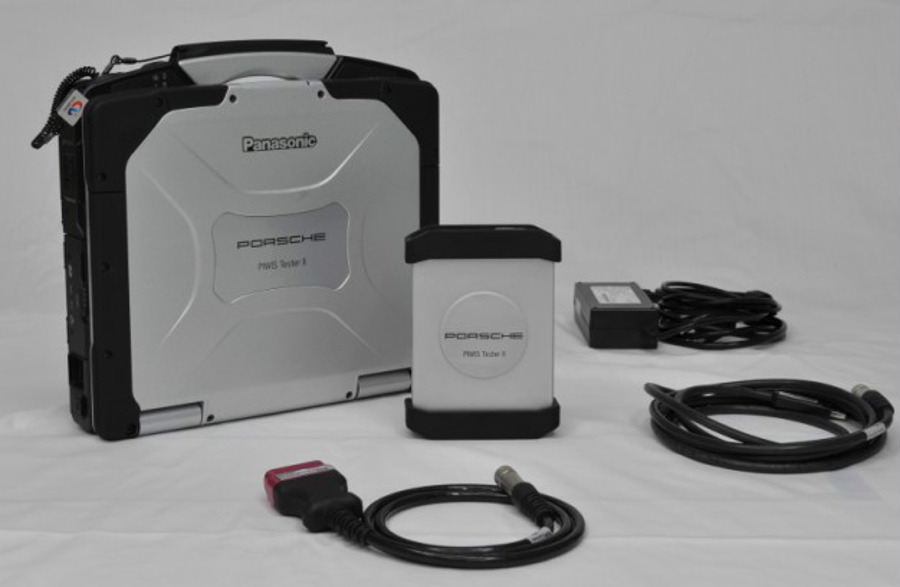 Porsche Integrated Workshop Information System (PIWIS) scan tool works with the latest and legacy Porsche vehicles, it's equipped with a Panasonic Toughbook laptop. The PIWIS scan tool is only available on long term lease from Porsche.

Preceding the PST2 was the Porsche 9288/Bosch KTS-300/301 (aka "Hammer" or "Pocket System Tester") works on cars to 1995 but doesn't do everything. The PST2 is backward applicable to OBDI but doesn't do some AC and Airbag issues on early cars covered by KTS-300/301. The PIWIS should eliminate the need for a PST2 but one may still need the KTS-300/301 for the earliest applications.

- Porsche 9268 LH and EZK: The original diagnostic tool. This device was used to diagnose Porsche 928. No longer in production.

- Porsche 9288/Bosch KTS-300/301 AKA "Hammer": This second generation tool was used on C2, C4, and 968. The KTS-300 uses card modules for different makes of vehicles. The factory Porsche card module offers the most functionality. No longer in production.

- Porsche System Tester 2 (PST2) / KTS-500: Introduced in 1997 for Porsche dealers to service the 986 and 996 model cars, though the Porsche System Tester 2 (PST2) is capable of diagnosing all models since the 928. The PST2 is based on the Bosch KTS-500 computer system but uses Porsche specific software that is not available on the KTS-500. The PST2 and the KTS-500 are no longer available.

- Porsche Integrated Workshop Information System (PIWIS) / KTS-650: Is similar to the PST2 but also supports CAN-BUS vehicles. PIWIS also integrates repair manual information into the diagnostic tester. The PIWIS is only available on long term lease from Porsche. The PIWIS is based on the Bosch KTS-650, but again it's software is Porsche specific. The Bosch KTS series supports some basic Porsche functions on Porsche 964, 969, and 944. The PIWIS I/II looks just like the KTS 650 except that it is grey instead of green.

Nobody has reviewed this product yet.
Add Review

Item has been shared via email.